Hello everyone, As most of you who read my blog know, I’m mainly into my wool crafts. But recently, I’ve really been getting into something called English Paper Piecing, or EPP for short. It basically involves putting fabric over paper … END_OF_DOCUMENT_TOKEN_TO_BE_REPLACED

Been such a busy couple of weeks, I feel I’ve had hardly any time to myself whatsoever. I’ve worked loads of extra time at the school lately since one of the teachers is off with laryngitis. Hope she feels better soon, I’m exhausted! Haha. Lots of busy time planning and sorting out things, and because it is December very soon, lots of Christmas plans to make! Urgh, I haven’t even had the time to think about what Christmas presents I’d like to get for other people. I won’t even start until next month.

So, what has been happening lately craft wise?

I was helping out in the charity shop again last week, and when I walked in, what did I see? 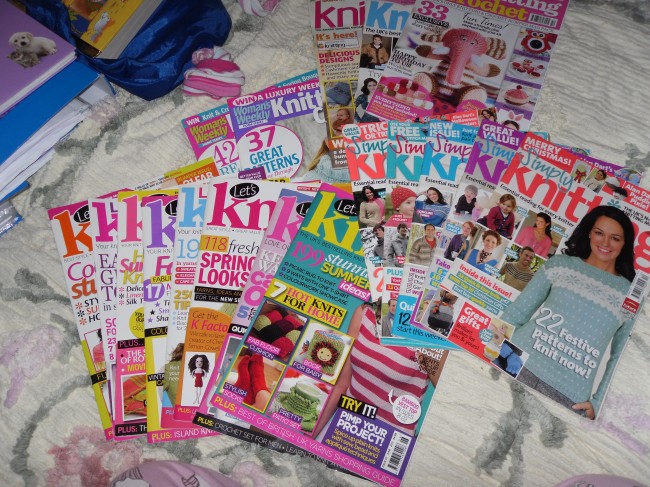 Oh yes, mine immediately! I was very good however, and only picked them up once I had finished all my school work. There are some good patterns in there, and some I know my Nanny will LOVE. Even a few Alan Dart patterns in there – score!

I get a little bored sometimes in the shop when it is quiet, so the last few times I have been there I brought my knitting along with me. I started this a few nights ago, using one of the massive Aran balls of wool blend that I had been given. 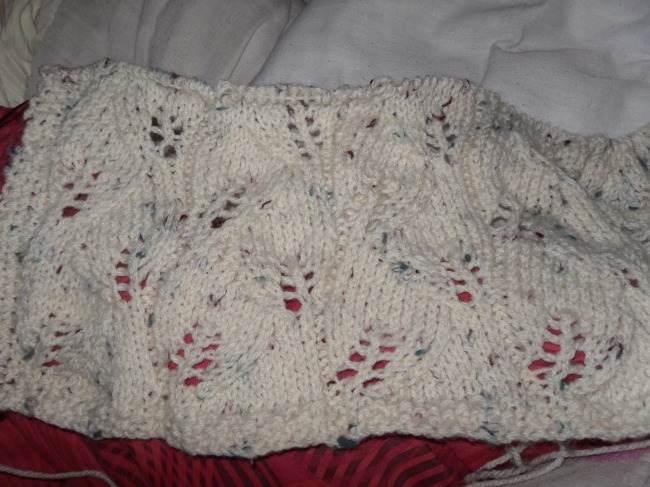 It is the ‘Falling Leaves Baby Blanket’ that I found on Ravelry. The designer has used cotton yarn which gives great stitch definition, but I thought wool would be nice, warm, and snuggly.

It is (the one I’m doing) 100 stitches per row, with a seed stitch border. Normally I hate seed stitch, but it’s working out perfectly fine. I’m worried about it being a little small, but I could always block it to see what it’s like after, and perhaps a nice, little crochet edging. Someone left a comment on the page about doing perhaps six rows of seed stitch to begin and end as it will match the sides better. As I knit on and look at the blanket, I can def. see why they would say that. Good idea.

I’m using my gorgeous brand new needles for this blanket! I’m still so excited about these needles, they are beautiful. Someone one Ravelry was selling a case of Boyes circular needles in coloured aluminium. You know, the kinds with the detachable cables? I saw it, and just KNEW I had to have it. I messaged the seller immediately and within ten minutes – mine! 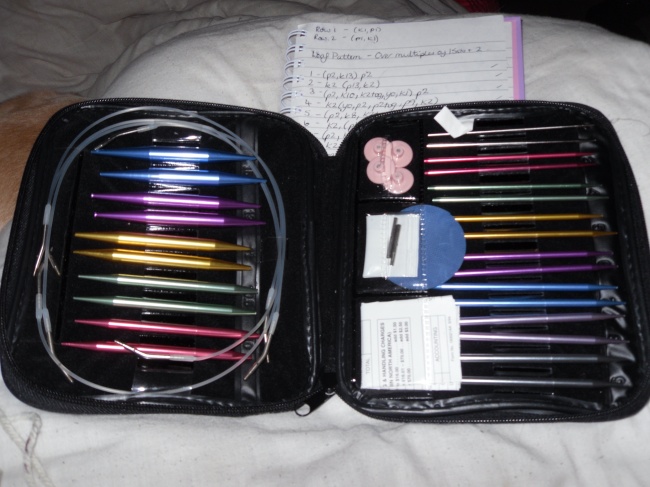 I’m using the 6mm ones at the moment for this lap blanket, the red ones at the bottom left. The cables get loose from the needles occasionally, but not enough to come off. Quick tighten and voila! They are so soft and smooth and I adore them. I love the fact that there are little end caps too (the little pink things in the top middle) that I can screw onto the ends of the cables, so I can use the needles later, or if I want to put them away. Beautiful. I wonder now if I can get dpns in the same mixed colours. Then I will have a case of circulars, a case of crochet hooks, and then some dpns. I’m using my circulars as straights too.

What else? I started spinning some ‘aubergine’ coloured alpaca the other night and finished it a few hours ago. 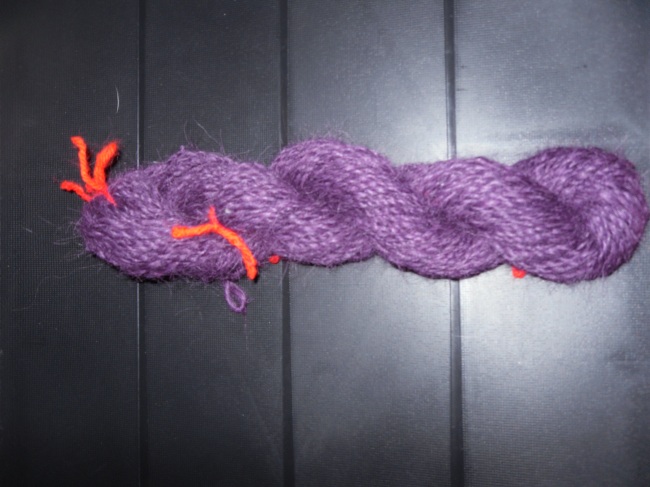 100g of DK dyed alpaca. I got out some more of my own hand dyed stuff from under the stairs and quickly spun up some of that too.

50g of Cheviot, hand dyed – Lucky Dip! This turned into…

Slightly thinner than DK. When people say that their fibre decides what kind of thickness it wants to be spun, I used to think, oh, how silly. Now I know that it does happen, it does decide for itself sometimes!

I am desperate to start dyeing up some of these silk hankies. I have plenty of oranges and reds to dye it with. Not sure if I want to dye them in full lots, or mix the colours up. I have about 100gish of hankies to dye. I might just dye them altogether.

A few great photos to finish this post off…

On a cold day, we made some porridge for the chickens. Didn’t they enjoy it! 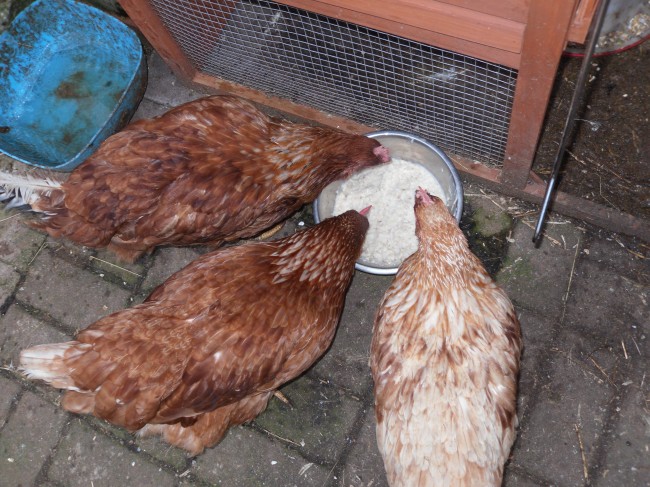 We also made some for Freddy. He hasn’t been quite right these past few days 😦 He started coughing the other night, and we thought it was because his collar had been pulled a little too hard once he was out on a walk. At night time he woke up three or four times just coughing, which is heart breaking to hear. He was very coughy through out the day too, but last night he was fine. And he hasn’t coughed again since I’ve been back. But the coughing was very loud, like he was choking almost, and sounded like a ‘honking.’ He wasn’t sick on any of the coughs which is good. We were going to take to him to the vets if the coughing continues but he seems right back to his beautiful, bouncy, adorable, energetic self. He is lying next to me right now, snoozing away, which I adore.

Right, I’d better go now, I’m so tired. It’s only twenty to nine, but feels sooooo much later! Might watch some TV shows with a cup of tea and the blanket. School tomorrow, so early night too. 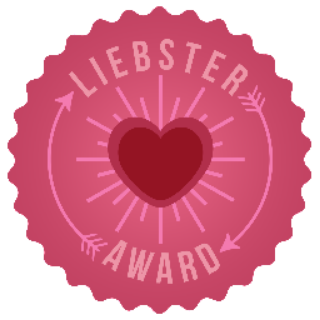 a fusion of textiles & smiles

My musings on art and life....

Religion that is pure and undefiled before God, the Father, is this: to visit orphans and widows in their affliction and to keep oneself unstained from the world. James1:27

In one of the stars I shall be living.
Keep Calm and Crochet On U.K

For the love of all things crochet...

The Fat Lady Spins
Down the Crafting Rabbit Hole

Take a tumble down the crafting rabbit hole, you never know what you'll find.

Crafting for the fun of it.

Crafting my way through life

On felting, hand dyeing yarn and fibre (and general silliness).